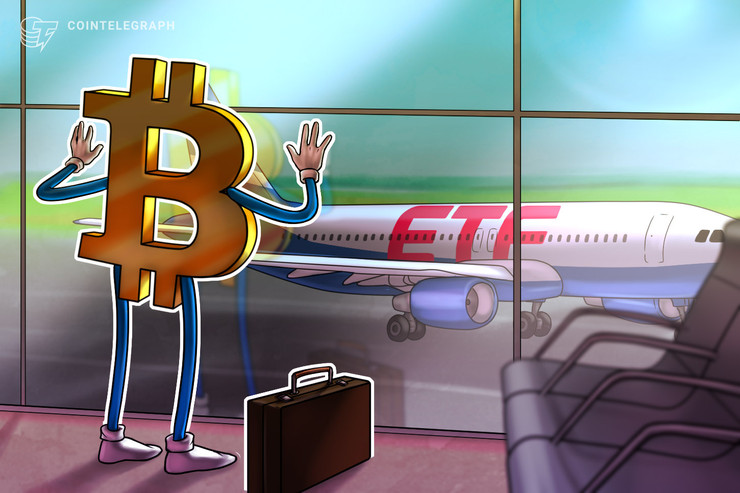 Over the past several years, many entities have submitted proposals for regulated Bitcoin (BTC) exchange-traded funds, or ETFs in the United States. So far, the Securities and Exchange Commission, or SEC, has not approved any official Bitcoin ETF product for the mainstream public.

What is an ETF and what is the holdup when it comes to BTC?

As crypto gains increased trust in the public eye, entities look for opportunities to bring digital assets into the traditional financial world as part of a more formal and regulated approach. As its first major step into crypto, the Chicago Board Options Exchange, or CBOE, and the Chicago Mercantile Exchange, or CME, launched cash-backed Bitcoin futures trading in 2017.

In an effort to offer further crypto-related products, mainstream entities look toward ETFs as a potential option. ETFs are products traded on exchanges that follow the price action of an underlying asset or basket of assets. Some ETFs are backed by cash, and some are backed by the physical assets themselves. Essentially, a crypto ETF would allow people to trade crypto products on traditional stock exchanges.

The situation becomes complicated with regulators, however, as they must ensure safe storage of the assets behind physically-backed ETFs. Asset validity and manipulation also factor into the equation as regulators do not want illegitimate assets and market manipulation controlling the prices on which these ETFs are based.

“There are multiple aspects and factors in getting an ETF approved to be traded on a US Based Stock Exchange,” Kryptoin CEO Donnie Kim told Cointelegraph. Asset management company Kryptoin filed its Bitcoin ETF proposal with the SEC in October 2019. The firm aims to see its Kryptoin Bitcoin ETF Trust listed on the New York Stock Exchange Arca, or NYSE Arca.

“At this moment in time the commission is listening and learning about this new asset class and they are in a holding pattern, partly to understand the consequences of the existing products on the market and partly to look for further guidance under the current political landscape,” Kim said.

Many have vied for SEC approval

Since 2018, the SEC has received a bevy of applications for various crypto-related ETFs. At least nine different entities have filed crypto ETF proposals with the commission, including Bitwise Asset Management, VanEck/SolidX and Direxion.

Several proposals have seen delays from the commission. The CBOE’s VanEck/SolidX ETF rule change bid faced multiple delays before the exchange pulled the application in January 2019, only to refile again several days later. The exchange once again pulled the proposal in September of the same year.

Other companies have seen their requests denied, as was the case with Bitwise’s Bitcoin ETF, which faced denial from the governing body in October 2019. More than a year earlier, the SEC also denied several cash-backed crypto ETFs from Direxion, ProShares and Graniteshares.

ETFs applications are still in play

At the time of their comments to Cointelegraph, Kryptoin, Crescent Crypto and Wilshire Phoenix all still had crypto ETF proposals in play, pending decisions from the SEC. At press time, it still appears as though all three outfits still await SEC decisions.

“Our registration statement is still in the review process until such time that the commission chooses to negotiate their way to a solution,” Kim said on Jan. 23 regarding Kryptoin’s single Bitcoin ETF proposal sitting with the SEC. “Until then we are simply in the queue.”

Crescent Crypto awaits an answer on its initial F-1 form submission with the U.S. regulatory body for its Bitcoin and Ethereum ETF.

“Crescent collaborated with USCF to file a registration statement (S-1) for a 33 Act Bitcoin and Ether ETP called the USCF Crescent Crypto Index Fund (NYSE Arca: XBET),” Matta detailed on Jan. 27. “The filing remains under review and we are evaluating the best course forward.”

Wilshire Phoenix also still waits on the commission for a ruling on the institution’s crypto ETF. “The SEC has indicated a decision will be made by February 26, 2020,” Herrmann said.

One of the hurdles facing the SEC’s approval of a Bitcoin ETF lies within the current regulatory framework around exchanges.

Over the past two years, the SEC has received multiple proposals from the CBOE regarding a rule change that would allow trading of a physically-backed Bitcoin ETF from VanEck/SolidX. VanEck, an investment management company, and SolidX, a software and financial services outfit, collaboratively backed the now-abandoned product.

In his comments to Cointelegraph, Kim noted that U.S. exchanges are the ones that require SEC approval for Bitcoin ETF listing and trading. “Once this approval is given, (even though that does not seem likely at this time as the commission is being quite mum about their requirements), the ETF product then needs to be analyzed and discussed to provide a mechanism suitable enough to satisfy another division of the commission,” Kim explained.

“If one division of the commission is not readily engaging in conversations or not willing to allow the rule change at the exchange level it is ineffective to push forward any application until such clarity arises. Basically, the SEC is a 2-3 headed dragon that needs the cooperation of all heads.”

Asset manipulation is another aspect the SEC sees as a potential issue, the governing body’s chairman Jay Clayton expressed in June 2019.

“The SEC has made it well known that their primary remaining concern is the manipulation of the bitcoin markets,” Crescent Crypto Asset Management co-founder Christopher Matta told Cointelegraph.

Crescent Crypto filed an application with the SEC in May 2019 for an ETF that includes both Bitcoin and Ethereum. The company, in partnership with asset management firm USCF, looks to list its USCF Crescent Crypto Index Fund (XBET) on the NYSE Arca.

“In their denial of other ETPs, the SEC has consistently highlighted their desire to see a regulated market of significant size that includes surveillance sharing agreements to monitor manipulative activities,” he added, referring to exchange-traded products.

Matta noted that the governing body sees the crypto scene as lacking the right ingredients in the right proportions. “In the SEC’s view, current crypto exchanges do not satisfy the ‘regulated’ requirement, while the regulated futures markets do not currently satisfy the ‘significant’ requirement,” he said.

Speaking only about its own crypto ETF, investment banking alternative Wilshire Phoenix said it has not had difficulties with its digital asset ETF proposal.

“We have not seen any obstacles in connections to our application,” Wilshire Phoenix founder Bill Herrmann told Cointelegraph. “We continue to have thoughtful and meaningful discussions with the commission,” he added.

Wilshire Phoenix submitted a proposal for a combination Bitcoin and U.S. T-Bill ETF, on July 1, 2019. The firm, in collaboration with the NYSE Arca, then updated the filing in October 2019, tapping Coinbase as the custodian for the product. Wilshire Phoenix aims to see its U.S. Bitcoin and Treasury Investment Trust listed for trading on the NYSE Arca.

Wilshire Phoenix currently waits for the SEC’s ruling on its crypto ETF, which is slated to occur on Wednesday. Given the massive number of delays and denials the SEC has dished out in recent days, odds would indicate an approval from the commission is not likely just yet.

As the crypto space continues to mature, the SEC likely will approve new products based on digital assets. For the time being though, the commission is up to its ears in applications and information.

If that was not enough to keep the SEC busy, at the end of 2019, the commission also announced an endeavor to research a new format for the age-old U.S. accredited investor rule, which has historically barred many U.S. participants from various activities.

Bitcoin is On the Cusp of an Explosive Movement as Exchanges Face Mass Exodus
Bitcoin Rallied 80% Without Any Gov’t Bailout: Time to Get Bullish?
Three Key Reasons Why Bitcoin Could Plunge Below $5,000 in April
🔴 Bill Gates Live | Microsoft, Bitcoin Crash, Anti-Bearish Coalition, Investments
400 Kraken Survey Respondents Predict Bitcoin Price Will Surpass $22K in 2020